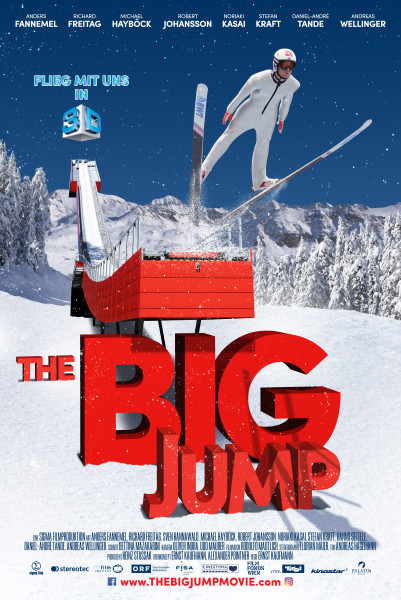 THE BIG JUMP is an adventurous journey into the world of ski flying and this high-tech sport is shown in spectacular 3D. The audience enters a world unreachable for most. What’s only a competition on television will be a euphoric experience, an insight into the most modern training methods and the discovery of the aesthetics of flying for viewers at the cinema.

The film will be the first cinema documentary about ski flying as well as the first full-length production about this sport reaching an enormous reception worldwide, and it will be ideal for the big movie screens.It´s not just be about the spectacle itself, but will also include some of the less public aspects of this sport. The film shows footage of the personal approach of the athletes and their mental preparation. It highlights the critical side of success and makes physical borderline experiences perceptible for the audience.

THE BIG JUMP is built upon the highlight of the Ski Flying World Cup 2018 in Oberstdorf. Based on this event, a wide image of this sport from the points of view of athletes, trainers and others is shown. Another important aspect is the steps towards the last reserves using different methods of sports medicine. In quiet, private moments, we encounter the protagonists off the beaten track of loud publicity, competitions and their will to win. It also highlights the further development of this sport. We will meet FIS Race Director Walter Hofer, who gives an insight into the future of ski flying and the complex processes behind the scenes. The Film will be based on the personal ways of exceptional athletes and their concepts of dealing with this challenge.